Material properties of the BIOCERAM AZUL

* The bending strength of a metallic material indicates tensile strength as a reference value.

Based on an investigation by Kyocera’s research department

Based on an investigation by Kyocera’s research department

BIOCERAM AZUL has succeeded in achieving high strength, toughness and hardness by strictly controlling the alumina/zirconia ratio based on alumina materials and evenly dispersing zirconia particles. 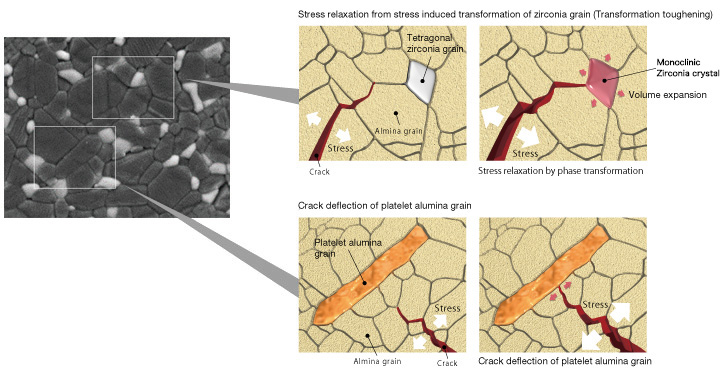 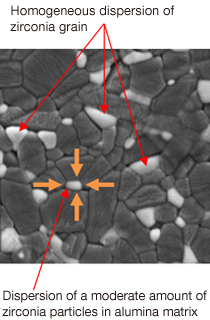 In general, zirconia undergoes an evident phase transition to monoclinic crystals at temperatures around 200-300 °C, which is reported to be accelerated by the presence of moisture. Therefore, there are concerns about the change in the crystalline phase of zirconia due to the inclusion of zirconia in the materials in BIOCERAM AZUL. However, BIOCERAM AZUL maintains tetragonal crystals due to the constraints of alumina particles through ingredient compounding and crystal control techniques. Also since there is no aggregation of voids and zirconia particles, it is stable in hydrothermal environments.

Stability of the crystalline phase

A four-point bending strength test of BIOCERAM AZUL under hydrothermal conditions showed no change in BIOCERAM AZUL flexural strength. Due to this characteristic BIOCERAM AZUL is stable in vivo.

Tested in combination with GP liner

To evaluate the wear properties of the BIOCERAM AZUL head, wear tests were conducted using HIP simulators and the results were compared with those of existing products (CoCrMo alloy).