In October this year, the total number of copies published of Kazuo Inamori's books exceeded 15 million.

Many of Inamori's books have been translated into a total of 19 foreign languages, including English, Chinese, Korean and Spanish. Amongst those, in China in recent years, interest in Inamori's ideas has been increasing with many of his books available in local bookstores, and large bookstores have set up a corner with Inamori's books. 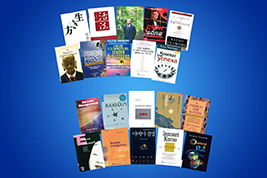