Dr. Kazuo Inamori recently donated 1 million shares of Kyocera stock from his personal possession to Kagoshima University, his alma mater. A ceremony for receipt of this donation was held at Kagoshima University on November 16. At the ceremony, the university representative presented Dr. Inamori with a plaque of gratitude.

In his remarks at the ceremony, Dr. Inamori said, "Because it is the place that educated me and nurtured my growth, Kagoshima University is much dearer to my heart than any other university. I hope this donation will provide the funds needed for even further academic advancement."

Kagoshima University intends to institute a new foundation and use the earnings from the stock dividends for purposes such as providing students with aid for study abroad and promoting the development of researchers. 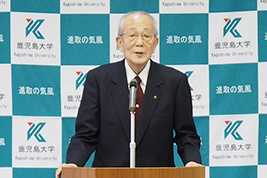 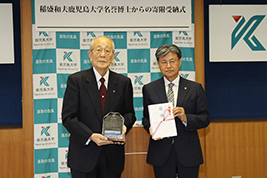