Seiwajyuku was an association that began in 1983 when 25 young business owners in Kyoto asked Inamori to teach them how to be effective managers. Upon receiving this request, Inamori taught them his management philosophy, which is characterized by the belief that a manager’s mission is to refine his or her spirit to bring about prosperity for the company and happiness for employees.
Seiwajyuku members continued to passionately study this philosophy and before long this initiative expanded all across Japan as word of these lessons spread and they recommended him to their acquaintances. And as of the end of 2019, when Seiwajyuku closed after 36 years, there were 56 branches in Japan and 48 abroad attended by approximately 15,000 members.

Seiwajyuku’s principal activities were the Regular Study Sessions with Inamori, and voluntary periodic study sessions managed autonomously by each branch.

After Inamori gave a lecture at the Junior Chamber, young business owners in Kyoto requested that he continue his seminars. As he continued receiving multiple requests, Inamori came to realize that he had made it this far in life thanks to society, and that giving back to some extent by volunteering to share his experiences would benefit young business owners and the Japanese economy as a whole.

With the launch of the Osaka branch, the name of Seiyujyuku changed to “Seiwajyuku (盛和塾).” This name, which was recommended by members, refers to harmony between corporate prosperity and natural virtues and incorporates characters from Kazuo Inamori (和夫 稲盛)’s first and last names.

“Seiwajyuku” (extracted from the Prospectus for Nationwide Organization)

Recently, though, there have been requests from many participants saying that, as happy as they are to be studying with me in person, there are many more young business owners across Japan that they want me to talk to so that they too can become excellent business owners.
I’m just one person, and I have time constraints. However, although I will turn 60 next year, with the encouragement of Seiwajyuku members, I decided to establish a nationwide Seiwajyuku organization for up to 5,000 young business owners. By giving my best efforts to convey my management rationale and outlook on life, I hope to help elevate the character and mindset of many young business owners. I further hope, as a result, I might be of use in fostering a level of management that will enable their companies to prosper, and to bring peace and growth, not only for employees but also for all human beings and the world.

The quarterly magazine “Seiwajyuku” was published to allow Inamori’s lectures and Seiwajyuku members’ presentations on their management experiences to be delivered periodically to various regions. By 2019, 156 issues had been published over a 27-year period, with approximately 3.5 million copies issued.

Once Seiwajyuku began transforming into a nationwide organization, Inamori suggested that there be an annual study seminar in which spouses could participate, which led to the establishment of the Seiwajyuku National Convention. This idea was inspired by the gratitude many Seiwajyuku members felt toward the support their spouses provided them as they concentrated on their management responsibilities. It would allow them to turn the event into a kind of trip while also providing the spouses a chance to see what the business owners’ jobs were like.
The first National Convention had 256 participants, and this has gradually increased, with 4,791 members participating from Japan and around the world in 2019 in a two-day joint study seminar.

A Brazilian business owner read an article about Inamori in a magazine and wrote him a letter earnestly requesting that a Seiwajyuku branch be opened in Brazil. This became the first overseas branch. This led to branches opening up in the U.S., China, and other countries.

I initially felt little connection to Kyocera, DDI Corporation, or your career. But you have influenced the world beyond your own through the Kyoto Prize, Seiwajyuku, and other efforts. I have never encountered an article by someone at the top of the business world that declares their feelings so frankly.
“There are no leaders here,” “I don’t know how to gather everyone’s strength.” As I was searching for a way out of my colleagues’ predicament, I happened upon this magazine. Would you consider creating Seiwajyuku in Brazil? I will gather my colleagues. Rather than a lesson in business fundamentals, everyone is seeking your moral support.

Civic Forum begins with a focus on members of the community

A lecture aimed at citizens in the community began because Seiwajyuku members felt that it would be a waste if only they heard the jyukucho’s words, and they wanted to give members of their the local community to whom they felt a debt of gratitude a chance to hear Inamori speak as well.
It began in Japan with a March 2002 event held in Tottori Prefecture, eventually expanding abroad to São Paulo, Los Angeles, New York, Taipei, having been held a total of 59 times for over 100,000 attendees. Inamori spoke on the subject of people’s reason for living and shared his own life philosophy.

When Inamori became the chairman of the then bankrupt Japan Airlines, a lot of Seiwajyuku members expressed a desire to assist him in some way and felt it was time to repay their debt, so they formed the “-Seiwajyuku 550,000 Volunteers Society for Supporting JAL- JAL Cheering Squad.”
The plan was to ride JAL flights and give JAL staff cards with messages inside to cheer them up. They chose the name based on the idea of there being 5,500 Seiwajyuku members at the time and each would get 100 of their acquaintances to write cards.

Branches close at the end of December 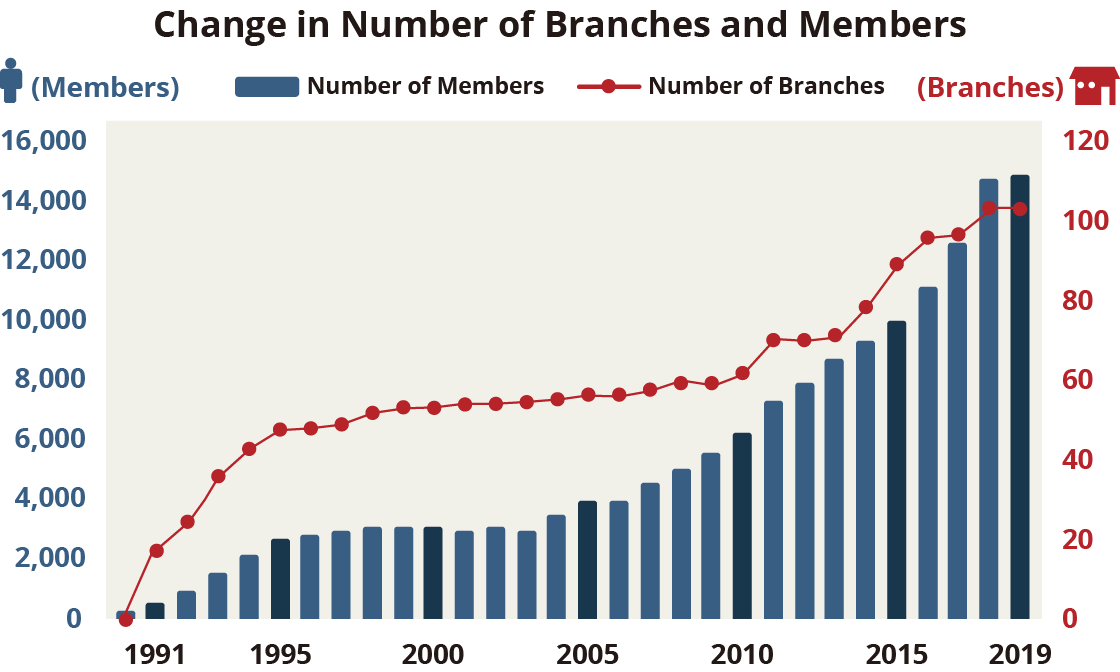